A win is a win, but it wasn’t easy getting there. In my latest blog I will talk about how my life has turned around, the feelings I have felt since winning Gold in the Paralympic Games 2016 and the support needed to get there.

The last 7 months post Games have been really busy for me, in fact so busy that I haven’t really had the time to sit back and soak up all the success I’ve had. Meeting the Royal family and attending lots of awards ceremonies. My life has become very demanding, not just on me but also on my family. I still spend many days away from my wife and children but know that what I am doing is something my children will look back on in years to come and be proud of what their dad has achieved, who knows they may also be very interested in sport.

I have spent many hours looking at my life in great detail, analysing situations and looking at the pros & cons of what I am doing. I ask myself daily “why am I doing this?” and the answer is always the same, I want to inspire people, be remembered by some as that person who never gave up, be the guy who would fight for what I believed in.

After all the awards ceremonies and short family breaks it was back to full time training. I had contacted my employer (Airbus UK) after returning from Rio, without whose initial support I wouldn’t have been able to get to Rio in the first place. I asked them if I could have another 4 years off work to prepare for the next Paralympic Games, this time in Tokyo. After some discussions and meetings, they agreed and drew up a contract to allow me to continue.

I returned to British Triathlon and consulted with them about what the next few years looked like for me, we discussed races, my training environment and other ways of ensuring I am in the best possible shape come 2020. 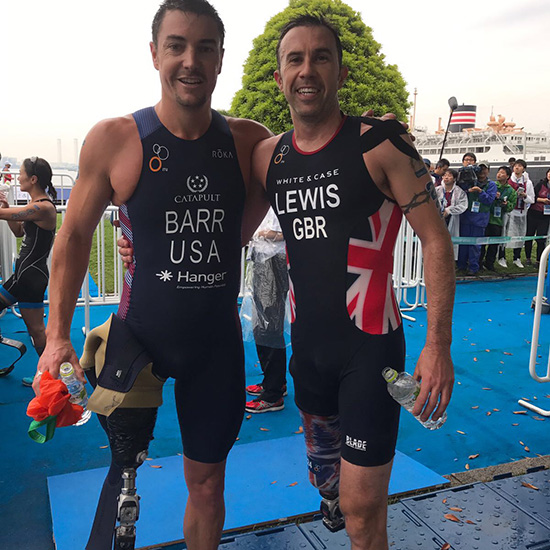 I moved from Loughborough (which is the main training venue for the Paratriathlon team and a few Olympic triathletes) back home to be around my family and friends. This was important to me as I needed to catch up on a few things and be there for my wife and children. I started looking at options to enable me to train at home. This had previously been a nightmare as the local facilities where I live and the people who manage it, were not very helpful. However, since meeting with them a few times and gaining support from local authorities, they have now agreed to support me on my quest to become a double Paralympian.

I started training on my bike with a friend and also found a coach in the Bristol area who was prepared to work with me. That was my swimming and bike sorted, so I then needed to get a Physiotherapist, Nutritionist, Massage Therapist and strength & conditioning coach. People don’t realise what an athlete needs in place to be the best. I gained the support from Bristol Sports Academy, who allow me to train with the coaches there which was very helpful.

My winter training block (Dec-April) has mostly been spent in Lanzarote where I am supported by a venue called Sands Beach. This is a great place to train and its very mountainous and can create great strength fighting against the strong winds. The other months I spent at home and just dropped in and out of Loughborough for team meetings.

During these meetings I would sit with my coach and draw up a race plan, this was vital to know what my performance targets were. We created a booklet called “What It Takes to Win” this is a personal booklet that each athlete uses to monitor their performance targets. We decided my races and started working towards those targets.

My first race was in Japan, a long flight for a 1hr race but it was a must to get the points for the upcoming season. We left the UK on the 8th May flying from Heathrow with the team. It was a very long and tiring trip that led to most of us suffering heavily with jetlag, including me. My sleep pattern was all over the place, sleeping about 4hrs a day, never really knowing where my energy was coming from. I was told that the sleep before the night before the race is the one that really matters, however for me that didn’t make much difference but I didn’t get any regardless.

Race day had arrived, it was Saturday 13th of May and it was time to go and play triathlon. I was nervous, in fact so nervous that I felt the pressure mounting and didn’t feel like racing, not having any sleep the night before a race wasn’t a good combination. I did however have a team around me that expected me not to be the person to just lie down and roll over. I grabbed my kit and made my way to the race venue.

Once I arrived in the athlete lounge, which is where we register for races, I was met by my coach and physiologist who helped me with my kit and keeping me calm. Once checked in it was my time to sort myself out and set up my race equipment in transition. Once I had done this I went for a little run and started to get into my race mindset.

It was time to get this race underway, the introductions of the athletes to the public were done and we were underway to get racing. We were asked to get in the water and prepare to be set off, those famous words “on your marks” and with the blow of a horn we were off.

The swim unfolded as expected, the first 200m was hard, a bit of a battle, people taking the wrong lines, each athlete making his way to the buoys which mark out the course. This can sometimes be a bit of a battle until people spread out a bit. The first man out of the water was an ex Paralympic swimmer in a time of 09:40 followed by an Aussie in a time of 09:45 then it was me, a whole minute behind. I knew I had some work to do but I was prepared to do that. I made my way into transition, making sure I didn’t leave anything to chance. I could see the guy in second place just leaving transition, that gave me the fire in my belly to get catch him, little did I know I had some serious work to do.

As I got onto the bike course I kept him in range, I was closing the gap and knew that if I could remain within 1 minute of him I stood a chance of getting on the podium. The course was very wet and slippery, a few times my bike would slide about but it made me even more angry and determined to catch him. It hurt but I am very unique in the way I race, once unleashed I can put myself through some serious pain and that’s something that cannot be learnt.

Once I arrived in transition to go out on the run I could see him, that was it, his cards were truly marked. As I ran out of transition two of my team mates came running past, so I ran behind them, using them as a shield and figuring out my move and how I was going to tackle it. I was slowly gaining on him, my team mates shouting at me to keep up. That was it I was behind him, I asked for the coaches to be quiet to enable me to make my move, I picked my moment crept up behind him and went for it, he responded with a little pick up of pace, but I had already picked up pace and left him behind.

My job was done all I had to do now was to hold on to a relatively easy pace and ensure that no one crept up behind me. I backed right off my run and allowed myself time to take it in.

As I approached the finish chute I looked back over my shoulder and slowed right up taking my time to lift the finish tape and make the most of the moment.

I won and only on 4hrs sleep, within 24hrs how was that possible, how does my body know what to do when I ask it with only 4hrs sleep. I am proud of my race performance I didn’t feel great but still managed to pull a good race out the bag.

I collected my medal, made my way to the hotel, packed my things and went for food with my team mates. We were leaving the following day, very early so I had a beer and congratulated myself on a performance that will be remembered by me for a long time. Last time I came to Japan I was told that I couldn’t race due to medical issues, this time I wanted to correct that and get what I had worked for a GOLD MEDAL.